It’s been a while!

We need to talk about titles. We had a grand total of 350 submissions for fiction for our last issue of Lunch Ticket. That means that I read 350 titles that mostly made me yawn.

I am using the following titles for educational purposes. This in no way reflects the talent of the author for reasons that I hope to explain.

here is a sample:

“Hole In The Wall”

The list goes on and on. The fact that this problem is so prevalent seems to indicate that the importance of the title is undervalued. We have accepted one or two titles above so, again, it is not a problem of talent on behalf of the author.

For full disclosure for educational purposes, here is a list of some of my titles:

“Nothing Said, Nothing Heard”

If so many of us are writing underwhelming titles, then we need to change that. Let me help you! Because I’ve been thinking about these things.

There are many thoughts about what makes a good title. Some people say in order to be commercial it should three words long, should be clever like a play on words, and/or it should make a statement about the human condition.

Well, that all seems terribly complicated to me, and I don’t really understand what that means.

Let’s start with looking at some titles of stories that have stood the test of time. I think one of the factors contributing to their longevity is the fact that the the title is weird enough to draw us in, and profound enough to make us reflect back on them when we are done.

J.D. Salinger’s timeless short story entitled “A Perfect Day For Bananafish” is one of the most perfect story titles ever, as is “For Esmé—With Love and Squalor.” Let’s really take a look at these two titles.

“A Perfect Day for Bananafish” achieves many things in five words. As a reader we are first caught by the word “bananafish” because we wonder what, exactly, that is. And then we look at the whole thing and wonder what he means by “a perfect day.”

So, as a reader, we are sucked in because we want to know what this is all about. We read the story and find out what a bananfish is and we learn that it really was a perfect day. However, after reading it and looking back on the title we realize that it was a perfect day not just because it was beautiful, but because Seymour decided to kill himself that day, and had planned for it to be the perfect day all along. With “For Esmé—With Love and Squalor” we, as readers, do the same thing again. We pause over the incongruous word squalor. We wonder to ourselves who would wish someone love and squalor? Why would you wish anyone, let alone a little girl, love and squalor? So, we again read the story to see why someone would do that. We are rewarded with a story about a soldier who almost loses his f-a-c-u-l-t-i-e-s if it wasn’t for the promise he made to a girl he barely knows to write to her after the war. He is so fond of her that he makes sure to add her favorite word: squalor.

We can now start to see Salinger’s trick with titles. He likes to throw a janky word into the mix that will become apparent if you read the story. Squalor, bannafish, etc. It draws us in as readers, but we get a pay off for reading the story and reflecting back on the title because we are now in on the pun, or, rather we are now just as clever as the author.

That is one way to make a good title. 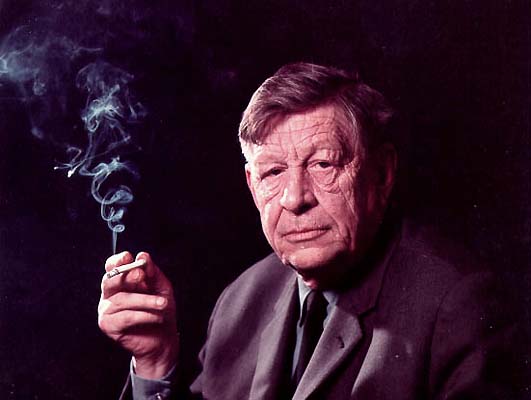 “How W.H. Auden Spends the Night at a Friend’s house”

“In A House Besieged”

While she also has a list of banal titles like “The Mouse,” “The Memory,” or “Selfish,” they are usually titled as such for a reason.

So, what can we learn from this master of short stories? I think the answer to that is to be playful. With regards to both Davis and Salinger, there is a hint of playfulness in their titles.

With Davis, the playfulness in more prevalent in “Marie Curie, So Honorable Woman.” The intrigue comes from the order of the words. We as readers wonder why Marie Curie is such an honorable woman. Why is it worded the way it is?

With “W.H. Auden,” we wonder why is it important the way he spends the night—is it not how the rest of us would do it?

What Davis does really well is invitation: she invites us to read on because she bates us with a clever yet playful invitation through the title.

Now let’s look at David Foster Wallace, who was always playful and profound with his titles:

“On His Deathbed, Holding Your hand, the Acclaimed New Young Off-Broadway Playwright’s Father Begs a Boon”

“Suicide as a Sort of Present”

What I hope is starting to become obvious is that really successful writers spend a lot of time on their titles. There is a polish that comes from spending some time on the title that I hadn’t realized before. I have now gone back to some of my short stories and tried to spend some time thinking about what I want people to get out of story, or the feeling I was trying to evoke, and wrote a title to that end. I was surprised at how it made my story seem more sophisticated.

When I go back and look at these titles by the authors mentioned above, I see that the title has more to do with theme than it does with plot. So, I think we should all spend more time thinking about the themes of our stories and writing a title toward that end instead of the plot.

Be a great author and judge your story by the title, and if the title is pretty good, chances are the story will be, too!