Today, we are going to talk about something all of us (hopefully) have: Memory. As writers of words, I think we come  back to our memory whether we want to or not.  What we do with our memory seems to arbitrarily separate us into genres these days: fiction, creative nonfiction, and poetry. But I am just going to go out on a limb and say that we’re all doing the same thing; trying to make sense of our memories.

I’m talking about a specific kind of memory: The kind of memory that I am talking about is the kind that  Virginia Woolf calls “moments of being.” They are the moments that stick with us. These are the moments in life that we have no real reason to remember, they don’t have a beginning, middle, and end; they exist as a self-contained moment. Like Woolf says, they are moments where we just are.  The weird memories are especially potent because we have no idea why we still remember them. Literature is full of these inexplicable moments that authors return to over and over.

Eating this little cookie explodes Proust’s memory wide-open to the time that his mother gave him the cookie when we was younger:

Many years had elapsed during which nothing of Combray, save what was comprised in the theatre and the drama of my going to bed there, had any existence for me, when one day in winter, on my return home, my mother, seeing that I was cold, offered me some tea, a thing I did not ordinarily take. I declined at first, and then, for no particular reason, changed my mind. She sent for one of those squat, plump little cakes called “petites madeleines,” which look as though they had been moulded in the fluted valve of a scallop shell. And soon, mechanically, dispirited after a dreary day with the prospect of a depressing morrow, I raised to my lips a spoonful of the tea in which I had soaked a morsel of the cake. No sooner had the warm liquid mixed with the crumbs touched my palate than a shudder ran through me and I stopped, intent upon the extraordinary thing that was happening to me. An exquisite pleasure had invaded my senses, something isolated, detached, with no suggestion of its origin. And at once the vicissitudes of life had become indifferent to me, its disasters innocuous, its brevity illusory – this new sensation having had on me the effect which love has of filling me with a precious essence; or rather this essence was not in me it was me. I had ceased now to feel mediocre, contingent, mortal. Whence could it have come to me, this all-powerful joy? I sensed that it was connected with the taste of the tea and the cake, but that it infinitely transcended those savours, could, no, indeed, be of the same nature. Whence did it come? What did it mean? How could I seize and apprehend it?

Proust wrote six volumes of Things Remembered, this excerpt is just the beginning of page 48 of volume 1. Thanks for reading allllllll of that. The reward for reading this excerpt is that it is the best example of what Woolf was talking about. This is Proust’s “moment of being,” and he has excavated every last layer of that memory.

What is the result of this exhaustive effort? Proust remembers a time when he was happy.

It all started with the madeleine. More importantly, it is the taste of this humble cookie that sets Proust’s memory off. The cookie is what causes Proust to investigate why he remembers the cookie. If you are interested (and you should be) in Proust’s exploration of what the cookie meant to him read the rest of Things Remembered.

According to Woolf, it is the why of the memory that authors excavate over and over. Tim O’Brien’s The Things They Carried is another exemplar of a book of memories written by an author who will never stop searching his memory for the why of his memories. O’Brien says “What sticks to memory, often, are those odd little fragments that have no beginning and no end…” The whole book is all about the odd little fragments of the the things his fellow G.I’s carried in their packs as they marched across Vietnam. Vietnam becomes O’Brien’s “moment of being,” where he tries to find the truth of what happened to him there:

In any war story, but especially a true one, it’s difficult to separate what happened from what seemed to happen. What seems to happen becomes its own happening and has to be told that way. The angles of vision are skewed. When a booby trap explodes, you close your eyes and duck and float outside yourself. .. The pictures get jumbled, you tend to miss a lot. And then afterward, when you go to tell about it, there is always that surreal seemingness, which makes the story seem untrue, but which in fact represents the hard and exact truth as it seemed.”

O’Brien advances our conversation about the use of memory in story because he talks about the differences between the happening-truth and the story-truth: Here is happening-truth: “I was once a soldier. There were many bodies, real bodies with real faces, but I was young then and afraid to look…” Here is the story-truth: “He was a slim, dead, almost dainty young man of about twenty. He lay in the center of a red clay trail near the village of My Khe. His jaw was in his throat. His one eye was shut, the other eye was a star-shaped hole. I killed him.”

As authors it is our duty to our memories to find the story-truth. What Proust and O’Brien do very well is that they explore their memories no matter how mundane or traumatic they are through story in the hope that the find the why or the story-truth. As fellow authors, we would do well to treat our own memories with the same fine-toothed combs that both these authors do. There is story gold in every author’s memories, we just have to figure out the best way to get it.

For Proust and O’Brien, that medium was fiction, but more and more, the medium that has quickly taken over as the realm of memory is creative nonfiction. CNF is a funny umbrella term that holds a lot of different kinds of writing; memoir, essays and biographies are sheltered under this term. Why, I have no idea.

David Sedaris is another excellent example of a writer who mines his memories for the truth. Sedaris has many awesome essays about his personal life. In his essay “Understanding Owls” Sedaris wonders at what kind of person he actually is. He does this by telling the story of trying to buy a taxidermied owl as a present for Valentine’s Day:

The taxidermist knew me for less time than it took to wipe my feet on his mat, and, with no effort whatsoever, he looked into my soul and recognized me for the person I really am: the type who’d actually love a Pygmy, and could easily get over the fact that he’d been murdered for sport, thinking, breezily, Well, it was a long time ago. Worse still, I would flaunt it, hoping, in the way a Porsche owner does, that this would become a part of my identity. “They say he has a Pygmy,” I could imagine my new neighbors whispering as I walked down the street. “Hangs him plain as day in the corner of his living room, next to the musket he was shot with.”

Through the use of this memory of a creepy encounter with a taxidermist who might be a little too into his job, Sedaris uncovers a story truth about himself: that he is a person who is fascinated with the taboo and the macabre. 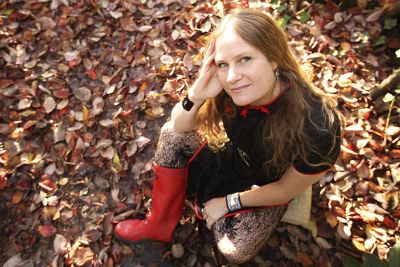 Lidia Yuknavitch is a friend of mine who wrote an awesome memoir called The Chronology of Water. This book has the strongest story-truth that I know of, and, in fact, I don’t think there would be a truth in it if this wasn’t told as a story.

“When my mother tried to kill herself the first time I was 16. She went into the spare bedroom of our Florida home for a long time. I knocked on the door. She said, “Go away, belle.”

Later she came out and sat in the living room. I went into the spare bedroom and found a bottle of sleeping pills – most of which were gone. Alone in the house with her, I scooped up an armful of vodka bottles and pills and brought them to her in the living room, my eyes full of water and fear, my mind racing. She looked at me more sharply than I ever remembered, and more focused than I’d ever seen her. Her voice was weirdly stern and two octaves lower than the southern cherry slurry drawl I was used to. She said, “Stay away; this isn’t anything for you, I’m not talking about anything.” She turned her gaze to the television. General Hospital was on.

A sad truth: You could hate your mother

I’ll leave you with this quote from Tim O’Brien: