They Hate If You’re Clever and Despise the Fool

It hit 120℉—122℉ in fact—a few weeks ago in my desert town. The days before and after weren’t much better: 116℉, and then 119℉, respectively. While these types are unheard of, we don’t typically see them until the dead of August for a couple of days. It’s nearly impossible to just walk to the car, let alone run errands, because the sun does not play; it will zap your vitality.

You can’t go for a run in the morning because it’s already 90℉ by 8 a.m. and even when the sun is gone from the sky, it’s a smooth 100℉. This is my sixth summer living in the desert and it gets hotter and stays hotter longer every year. Summers are always brutal reminders that the climate is rapidly changing. Winters are as well. When my partner and I moved into our bigger apartment, we were excited it had a fireplace. Neither of us had one growing up and we were excited to use it. Spring, fall, and winter are lovely times in the desert and it does get cold enough to warrant using a fireplace. That first winter, it was cold enough for (almost) nightly use; the second winter, we used it for a couple of weeks, and then last winter, only three times. The numbers rarely dipped down to “cold enough for a fire.” I told my partner this was ominous and I wondered how close we were to not needing a fireplace at all.

2020, at best, has been a dumpster fire of a year. On a phone call with a couple of my friends, I joked that we seem to be checking off all the biblical plagues, then I serendipitously stumbled across a Time article that gave theories about what caused the ten plagues of Egypt. One was about red algae that deprived Egyptian waterways of oxygen that led to the water turning red, which killed fish and caused frogs to leap out of the water and look elsewhere for food. This caused a chain of events that led to all the plagues. However, the theory is that the red algae wouldn’t have happened without the climate changing, such as prolonged dry periods that dried up the Nile and sped up the growth of the algae. It was an interesting read and solidified my own theory that our phones are listening to us.

However, a very loud minority in the US has shown their complete contempt for anything science and informative and they take pride in their willful ignorance. It’s why this global pandemic has become politicized; people would rather be right than be objectively correct. I knew in my heart that we would see a second wave solely based on a few of my Facebook friends screaming how being considerate is akin to oppression. The sheer hubris these people have is astonishing; they’re oppressed because they have to wear masks. That’s something that is mildly inconvenient, at best, but these fools are acting like they’ve been blasted with fire hoses as they peacefully protested across a bridge. Out of everything, this is what I hate the most: the momentumental display of lack of self-awareness.

I used to work in the service industry, so I’ve never been surprised by the selfish entitlement of the population, but it’s always jarring when you discover that some of your good friends are aggressively ignorant. One friend, whom I used to hang out with fairly religiously and whom I spent a couple of holidays with, is completely incapable of reading anything objectively. For example, they share a news article that says the sky is blue and sometimes has clouds. They would say “See! This article is covering up the fact that the sky has always been red and is being hologramed with birds and clouds!!!” I’m not being hyperbolic either; this friend would always pull some blatantly false information out of what they shared and proudly display their ignorance.  I, and many others, would point this out, even finding other citations and facts that backed up the fact that the sky is blue and does have real clouds, but this friend refused to listen.

Another friend shared a propaganda opinion piece from another country about the US as truth. There was no question that it was from a propaganda website, according to several other global fact-checking sites, but the biggest tell was that the writer claimed to be an American lawyer but never gave their name, what school they graduated from, or the law firm they worked at. I pointed this out to my friend, but they dismissed me and said they agreed with the article. That same friend and I had briefly butted heads a couple weeks prior when they tried to convince me the pandemic was a hoax by sharing a video from a YouTube channel that was well known to doctor their videos to fit their narrative. I pointed that out and told them to find a better source. When they couldn’t, they sent me a wall of text that suggested they were in a deep state of mindless victimization. You cannot reason someone out of something he or she didn’t reason themselves into.

In Southern California, Los Angeles, San Diego, and Riverside County school districts will be doing distance learning in the fall for everyone’s safety. These counties listened to public health officials, who were listening to the scientists, except for Orange County, which voted to open schools in August. Orange County is the loud minority and just like with climate change deniers, they are a loud minority who are calling scientists frauds, accusing them of being paid actors, saying they’re on the payroll of a political party, or calling them various other disparaging names. The loud minority doesn’t believe a word the scientists are saying and they’re demanding that everything open. To best sum up what the gag is, here is a sign from a protest: 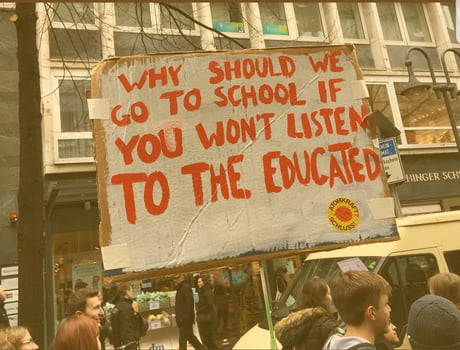 These people are being very vocal about opening schools but dismissive when an educated person explains science. Do you know where I learned about climate and weather? School. I learned about science at school too and how it works in my everyday life and in the world around me. I learned about biology in school and the different types of bacteria, viruses, and the diseases that can happen to the human body. In elementary school, I learned about basic hygiene and various methods of prevention, like washing my hands and covering my mouth when I cough, which can help stop the spread of diseases.

And that’s what it really is, just a basic knowledge of hygiene, a mask, and a bit of courtesy. In Japan, the culture is so considerate of itself, they wear masks when they feel sick so they won’t spread illness. As in, they wear masks regardless. When I was a bartender, I couldn’t count how many times people would come into the bar and tell me they were sick or getting sick or in the middle of being sick but really wanted a beer. No regard for other people’s health or awareness of their situation, they came to the bar and decided to breathe their sick germs onto everyone and everything. It was revolting to have them (constantly) cough in my face. It was enraging to see them sneeze into their hands and then start fondling through the oranges and cherries in the fruit caddy. I was incensed as they tried to have a conversation with me, like I want to breathe their nasty, flu-ridden saliva molecules. And then they would have the audacity to get an attitude with me because I didn’t talk to them at length like I did the rest of the bar guests. Some even complained to my managers. The entitlement was limitless which is why I wasn’t completely shocked by the behavior of my countrymen. Nor is any person that has worked in the service industry.

This year is dumb, the administration and its botched inaction are extremely dumb, and people who ignore science for their feelings, despite clear evidence that it would save us all, are incredibly dumb. When this pandemic hit, I had depression over the uncertainty of how it would play out. Now I’m sure we won’t see any type of relief until extreme measures are taken or Senators and representatives in the administration start dropping dead. The future seems bleak but the port in this hurricane is seeing Americans protesting for their country. None of this should be happening and it is not normal. Looking at the rest of the world is concrete evidence; new cases of COVID-19 and deaths are down, or at least not as high as the US, and many countries are beginning to reopen. They also took notice of how psychotic Americans and the federal government are acting and banned the US from European travel.

Educators and teachers are some of the most underpaid, extremely important people. They do things like teach students critical thinking. That way, when a world-renowned doctor tells us to socially distance for the good of ourselves, our loved ones, and our country, we won’t start shouting that it’s a brainwashing hoax meant to jeopardize our freedoms. That way, when people say we need to save Earth and here are ways to do it, we won’t… Actually, I’m not sure why there’s some big problem with making Earth a better place??? Even if you think it’s not man-made, why wouldn’t you want to have cleaner air and water and preserve the creatures and environment on the only planet we live on? Don’t get complacent. Big changes and focus are needed to survive this. Check your voter registration and vote in any and all elections; city, town, county, state and federal. The months of protest have shown Americans will fight for our country. Stay woke.

“Where justice is denied, where poverty is enforced, where ignorance prevails, and where any one class is made to feel that society is in an organized conspiracy to oppress, rob, and degrade them, neither persons nor property will be safe.” -Frederick Douglass Stephanie Teasley graduated with an M.F.A. in Creative Writing from Antioch University Los Angeles. Her engaging and multifaceted style of writing transfers over from her bartender skills as she mixes prose as she does with drinks. She is currently the Blog and Content Director for Lunch Ticket and is a contributing writer for Cuisine Noir. Check out more of her work here.